The Cessna 172 Skyhawk is one of the most produced general aviation aircraft and is a favorite of many flight schools around the world.

The Cessna 172 originally was powered by a 145 hp continental engine and later models were powered by a 160 hp Lycoming.  Our Cessna 172 was upgraded in 2006 with a 180hp Lycoming engine and structurally improved to increase the useful load by 200 pounds.  It also received new exterior paint a few years later.

These modifications make the airplane not only good for training primary students but also as a relatively fast cross country airplane and able to carry 4 adults with 3+ hours fuel endurance.

These are a four-seat, high wing airplane with great visibility. They are comfortable, predictable and very well built, making them one of the most popular training aircraft ever built. 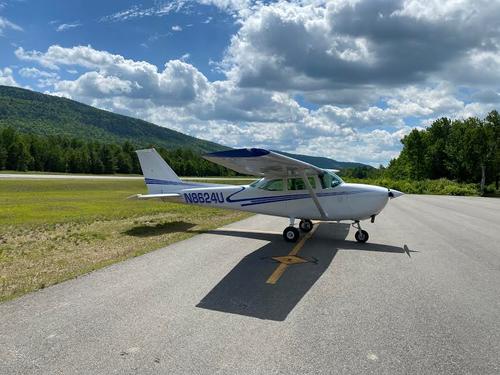 Whether you are 16 or 72, we want to partner with you. Curious about what it is all about? Take a Discovery Flight! This is your first introductory flight lesson. Actual flight time is about 30 minutes, during which the student takes the controls for some basic flight maneuvers. The instructor handles the take-off and landing, with the student following along on the controls. At the end of the flight, there will be a debriefing to go over the flight and help you to plan for your next lesson. Allow about one hour for the whole package. The cost is $99 for any new student.

Gift Certificates are available on our Pilot Store page.